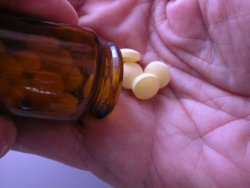 Vitamin D deficiency symptoms are widespread and very common even in America where many foods are fortified with the hard-to-find Vitamin D.


Vitamin D is actually found in very few foods naturally, which is why so many people experience Vitamin D deficiency symptoms. Although it is made in the body when exposed to sunlight, our indoors lifestyle and aversion to the sun due to its carcinogenic properties make this a relatively small source of Vitamin D for most people.


Symptoms are often vague and involve the entire body for people who experience chronic borderline deficiency. Vitamin D levels are often the first thing checked when a patient sees a doctor complaining of depression or anxiety due to the prevalence of Vitamin D deficiency symptoms masquerading as serious depression.


In children Vitamin D deficiency symptoms are more severe, resulting in devastating bone deformities. This used to be fairly common and was known as rickets but thanks to the fortification of Vitamin D and the public awareness of a proper Vitamin D doseage, rickets is mainly a thing of the past.


The symptoms of a Vitamin D deficiency can be avoided by getting enough Vitamin D into the body either through eating lots of Vitamin D foods or taking a Vitamin D supplement.


It’s important to note that Vitamin D is fat soluble, meaning that an overdose is possible which can result in toxicity and side effects, though it is not known exactly what those effects might be.


It’s not recommended by many authorities that sunlight should be a substantial source of Vitamin D for people due to the fact that UV rays conclusively cause cancer. Despite this fact, it is possible for people at any latitude to get the UV exposure required for adequate Vitamin D levels, although no guidelines exist for what exposure this should amount to.


It’s also a myth that people at higher latitudes are more prone to Vitamin D deficiencies due to the general world wide awareness of UV damage and the availability of SPF lotions.


Vitamin D foods include cheese, milk, eggs, and beef liver but the best food source of Vitamin D is actually from fish oils and one serving of salmon can provide 100% of your daily need of Vitamin D.


The only vegan source of vitamin D is UV-irradiated mushrooms, which means that Vitamin D awareness is particularly important to vegans.


Like most vitamins and nutrients, many people report looking better and feeling better after supplementing their intake and this is because most of the vitamins are used in cells throughout the entire body so that any deficiency symptoms are widespread and noticeable.


This makes it crucial to be aware of how much Vitamin D you are getting and ensuring that it is an adequate amount.

Return to Facts About Vitamins Homepage