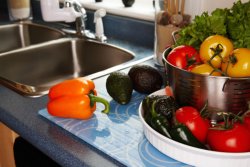 
Even though they are a bit more unrecognized, foods high in Vitamin E are just as important as the other vitamin loaded foods, if not more so. Vitamin E foods are so good for your health that it’s crucial for you to add them to your diet.


Vitamin E is most commonly known to be a good antioxidant and helps counteract the negative effects of free radicals which are generated naturally by our cells.


Even though free radicals are natural, they are actually a harmful waste product that causes DNA damage, cell aging and death, and in a lot of ways, human aging in general. Vitamin E foods can help stop this damage as they rush in and essentially neutralizes the dangerous free radicals.


Vitamin E is also known to be good for the skin with many people aware that vitamin E capsules are often sold as skin or hair treatments. The vitamin is also useful in many enzymatic processes in the body, ranging from the immune system to the nervous system and beyond.


Vitamin E deficiencies are so severe as to include ataxia, paralysis, neuropathy, myopathies, and more. Luckily, because there are so manyVitamin E foods , it’s not common to suffer these severe symptoms.


Foods high in this vitamin include wheat germ oil, which is one of the best sources of the vitamin. Just one teaspoon has enough Vitamin E for the average adult’s entire day.


Sunflower, soy bean, and safflower oil also are high in Vitamin E. Coincidentally, these oils are actually thought to be some of the most healthy foods that are out there right now and one incarnation of the traditional food pyramid places these oils at the bottom of the pyramid, showing them to be the basis of the healthiest possible diet for humans.


Additionally, many processed foods are fortified with Vitamin E, particularly breakfast cereals which tend to be fortified with a whole range of vitamins to ensure that children in particular get the vitamins and minerals they need to grow and be healthy.


Many of the foods containing high levels of Vitamin E are not the most popular of foods, especially not for children who can be used to over processed, sugary and fatty foods, so that is why adding Vitamin E to breakfast cereal is a way of preventing any deficiency.


Although some people warn about the dangers of Vitamin E, it’s worth noting that there is no known danger of eating too many foods high in Vitamin E. It’s practically impossible to overdose if you stick to the wholly natural forms of it.


However, it is possible to take too much Vitamin E in supplement form. There have been cases where people have suffered hemorrhagic stroke due to over consumption of the supplement form.


There is a lot of debate about how much Vitamin E is too much and what exactly the risks are, but it is safe to say that following the daily recommended amounts and sticking primarily with the natural Vitamin E foods is a good way to go.

Return to Facts About Vitamins Homepage