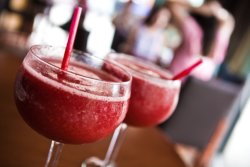 A great way to have a healthy treat...

Tens of thousands of people around the world use weight watchers smoothies as part of their dieting programme. In the USA it is possible to buy pre-made smoothies, but in the UK, the best alternative is to simply make your own.


This can be a great way to enjoy your ‘points’ whilst at the same time feeling like you are having a treat.


The entire weight watchers concept is built around a points system. You are basically allowed to eat what you like, as long as you stay within a certain amount of points a day.


However, the system is designed to encourage you to consume more healthy foods than it is junk ones (junk foods weighing heavily in points, fruits and vegetables much less so).


This means that weight watchers smoothies can be an excellent method of combining fruits to make a tasty snack or meal, whilst at the same time, using very few points up.


So does weight watchers work?...


The Weight Watchers Diet Plan works for most people that stick within the rules of the suggested programme, and as it is based around a healthy diet, has the least amount of side effects of any dieting system.


Weight Watchers Smoothies can play an invaluable part in this, and if you would like to read more about the benefits of smoothies in dieting, you could read the article entitled ‘Smoothies’ which is linked from the navigation bar on the left of this site.


The weight watchers point guide is designed to be flexible, and so you can make a weight watchers smoothie as light or as heavy as possible. It goes without saying that the more you add into it, the higher the number of points that will be used.


Whenever possible, try to use the freshest produce, and where possible, use organic to ensure that they are pesticide free and packed with vitamins and minerals.


Consideration should be given to the base used in the smoothie. Traditionally, this might be ice cream, but this will ruin your points system before you even start!


Instead, try either a non fat yoghurt or even an orange juice base with ice. The ingredients would then be up to you, but bananas, apples, strawberries and pears are all very healthy fruits with strong tastes and appealing colours when mixed.


With a good blender, many things become possible, and apart from fruit smoothies, vegetable smoothies can be made from ingredients such as celery and carrots. In fact, the options are only limited by your imagination!


If you find that you have come up with an interesting recipe, then please by all means drop us a line so that we can share it with the rest of the world via the Real Diet Plans website.


Weight watchers smoothies are a tasty and refreshing addition to any dieting plan. Research has suggested that smoothies may also help to speed up the metabolism, meaning that not only are you keeping within your points, but that you will be burning them off faster as well. It doesn’t get any better than that!